In this section of the blog, we’ll meet French people living in Barbados. A census carried out by the French Consulate indicated that there were around 250 Frenchies living here.

Today, it is Laure’s turn to relate her experiences in Barbados. She is from Manosque, a small town in the southeastern Department of Alpes de Haute Provence. 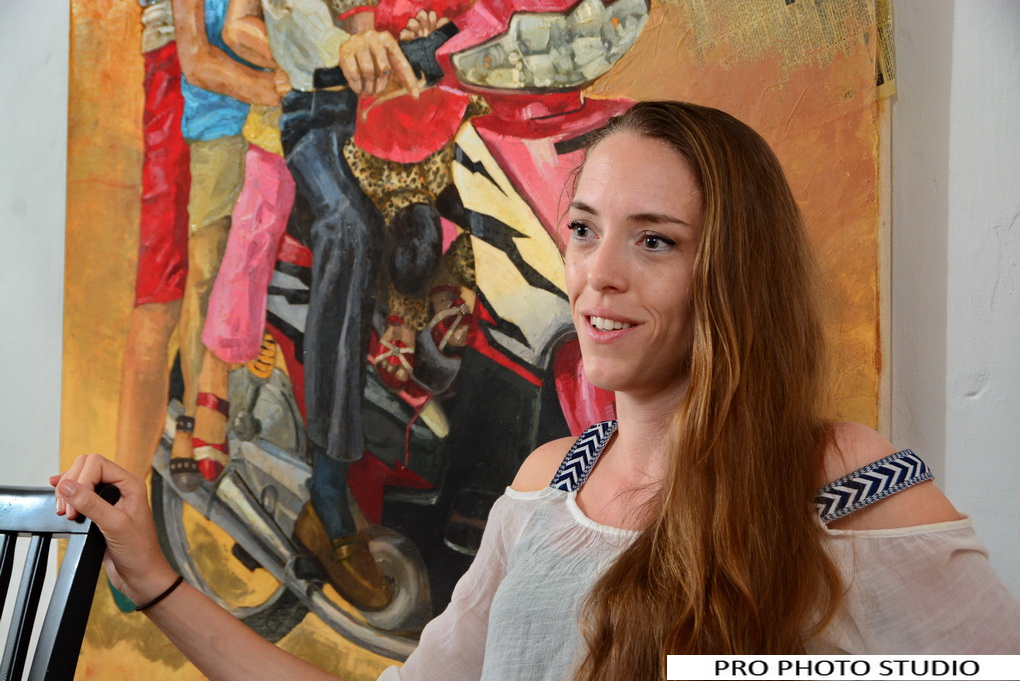 So Laure, tell us, what brought you to Barbados?

I arrived a little over two years ago on a work contract with PAHO.

Yes. Everything had been organised for me so it wasn’t too difficult. Travel arrangements, relocation, etc., had all been arranged, so it was rather easy. Furthermore, I’m used to relocating from one part of the world to another, as I lived in Vietnam and South Africa before coming here. And Barbados is quite a nice country – there are no safety issues and things are fairly easy. So yes, everything went well.

I could just about find it on a map, but I must confess that I knew nothing about Barbados. In France, Barbados is not very well known. We know Rihanna (laughing). More so in South Africa, where she is really famous as well, but apart from that, we don’t really hear much about Barbados.

Hmmm… maybe the fact that there really is no great culture shock. I mean, compared with moving to Vietnam or South Africa, where things are very different indeed, the difference isn’t that great in Barbados.

So for you, the culture shock was greater in Vietnam and South Africa?

Yes. In Vietnam, the language, religion, food and traditions are completely different. Even grocery shopping is complicated as there is no supermarket – at first, you don’t know where to find things. In South Africa, English is spoken and, culturally speaking, it’s closer, but there are other problems – particularly, where safety is concerned – that don’t exist here. You’re forced to live in protected homes, you can’t walk around in the street… So, at the end of the day, for me Barbados seemed more similar (to France).

What do you do at PAHO?

Is there a significant difference in health policy between the French and English speaking islands?

Yes. As the French Departments are considered a part of France, all French citizens must have access to all the health services they would have in mainland France. So there are first-rate university hospitals where rather complex surgeries can be performed – heart surgeries, etc. – that are not always possible in the English-speaking Caribbean. So, I’m interested in sharing the expertise available in the French islands with the English-speaking Caribbean.

At the moment, there is a bit of brainstorming on hospital cooperation to see how certain services could be introduced to the English-speaking Caribbean. There are also discussions concerning research. For example, when faced with new epidemics, such as Chikungunya, we will try to collaborate on programmes with neighbouring countries and advance research projects. The same goes for tropical pathologies or illnesses that don’t necessarily exist in mainland France.

Are there any specific projects for Barbados?

Yes, there are a few projects involving Barbados. A few years ago, the International Health Regulations were adopted and stipulate that every country must meet certain standards in terms of epidemic prevention, etc. So we are working with a team from Martinique to help Barbados attain the desired standards. And in September and October, we will organise training on how to manage chemical or nuclear risks. For example, should a major chemical accident occur in Barbados, what would be the course of action to take, how to decontaminate the zone, etc. These are examples of projects where the French Departments will come and assist Barbados.

And now to completely change the subject, it seems that you are a comic strip creator, how did that interest come about?

Comic strips are much more popular in France than here and they’re something I’ve always liked. My mother was an art teacher and my father was an architect, so I’ve always loved painting and drawing. One day, I thought it could be fun to try and create a comic strip and I was lucky enough to find a publisher who was interested. Voilà.

Have the various countries in which you have lived influenced your scenarios?

Yes. My first scenario was about Vietnam and China while the second one was about the Opium War, which took place in the 19th century. Actually, I created both books while living in South Africa and now that I’m here, I’m doing one on South Africa. I imagine that once I’ve left here I’ll do one on Barbados and the Caribbean. I think it’s good to have a bit of perspective each time.

But it’s true that since I’ve been here, I have started using more colour. I hope I get to do a comic strip on the Caribbean… I will try to recreate the light here.

There are several stages. I use a Cintiq, an apparatus specially designed for comic strips (Laure does not draw freehand). I make a rough sketch directly onto Photoshop, over which I trace the black line art (a technique used in comic strips). Then I remove the rough sketch and send it to my colourist who adds the colour on a separate layer. Creating a comic strip is a multi-layered process. It takes about eight hours to do one page. And obviously since I work I can’t dedicate myself to it full-time. For example, this book (Opium) which is about 150 pages took me one year to complete… it’s my second book. 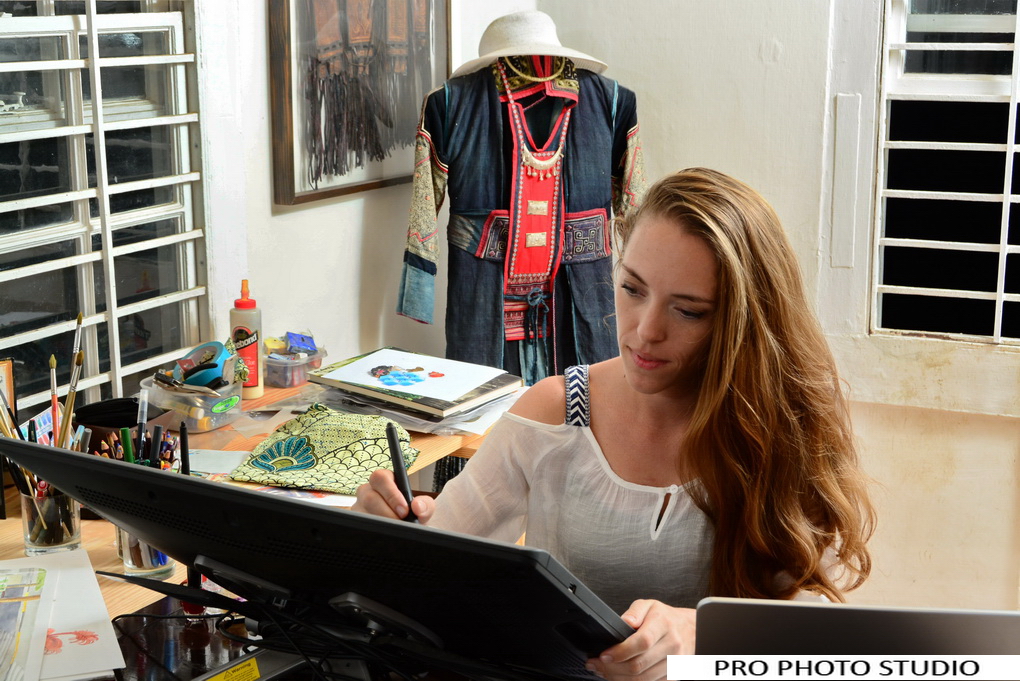 Is there a special technique used to ensure that characters always have the same features?

Not really. To ensure characters’ features remain the same, you just have to draw, draw and draw… at first, you work on drawing each character in different poses so that you get used to drawing them…

I really like the colours and the light. Maybe it’s because I paint, but I pay particular attention to them. We don’t have a car here and walk everywhere and doing so allows us to see just how beautiful Barbados really is. There are always lots of flowers everywhere, sunrises and sunsets are stunning, the houses are colourful… there are lots of beautiful things to look at.

And what’s really great about Barbados is the public transportation system. You can go everywhere by bus here. Compared with the French islands of Martinique and Guadeloupe, where there’s little in the way of public transportation, Barbados is way ahead. I think it must have one of the most dense bus networks in the world. When we arrived here after leaving South Africa – where due to safety concerns you are forced to use a car as it’s dangerous to walk around – we looked at the size of Barbados, which is 21 x 14 miles, and decided that we didn’t need a car and that we would walk or bike everywhere. And we get along just fine – and we get to see Barbados in greater detail.

I love going to Bathsheba… the East Coast. I really like hiking so often we’ll just walk along that coast and it’s quite spectacular. There’s also North Point, which is equally impressive with its cliffs and wild landscape. And I also like Hunte’s Gardens… all the colours and the layout. It’s pretty cool there.

Something I’d never tasted before and that I’ll order pretty regularly now is barbecued pigtail. It’s so greasy… but it’s delicious (peals of laughter)! It’s something that’s not eaten anywhere else (in any case, I’d never tasted it before coming to Barbados). So, I’ll have it whenever it’s there to be had. But yes, it’s greasy.

What I find amusing is the Bajan accent rather than any particular expression. None come to mind. I admit that sometimes I don’t understand some Barbadians when they speak because of the accent. But I find it rather musical. I rather like the Bajan accent.

We go to the beach fairly often and it’s right next door. That’s one of the great things about Barbados… you’re never far from the beach. My favourite lies at the end of the Boardwalk heading towards the Hilton hotel. There’s a spot where people have created a pool of sorts in the water and I really like it because it’s so calm, it’s like being in a tub. It’s beautiful there… I love it. That’s the place I will miss. 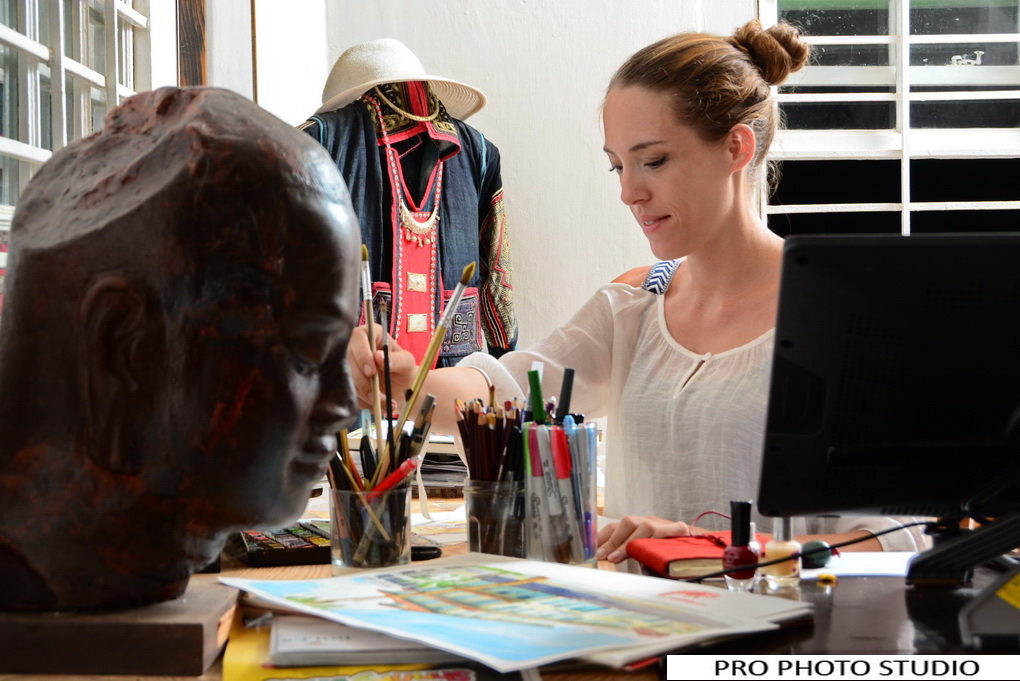 I draw. I try to draw at least two hours every day… to move things along. Comic strips are more time-consuming compared with painting, as a page is made up of around fifteen successive illustrations.

I also do karate – I go to the dojo three times a week. I began here as a white belt and now I’m a purple belt, so I’ve made progress (laughing).

Any advice or tips for French people who might be thinking of moving here?

Stock up on French goods – sausages, cheese, wine – before coming.