In this section of the blog, we’ll meet French people living in Barbados. A census carried out by the French Consulate indicated that there were around 250 Frenchies living here.

Now, Catherine, artist and wife of the Honorary Consul of France to Barbados, will relate her Bajan experience. She comes from famous wine country – Bordeaux, to be exact, located in the French southwestern Department of Gironde. 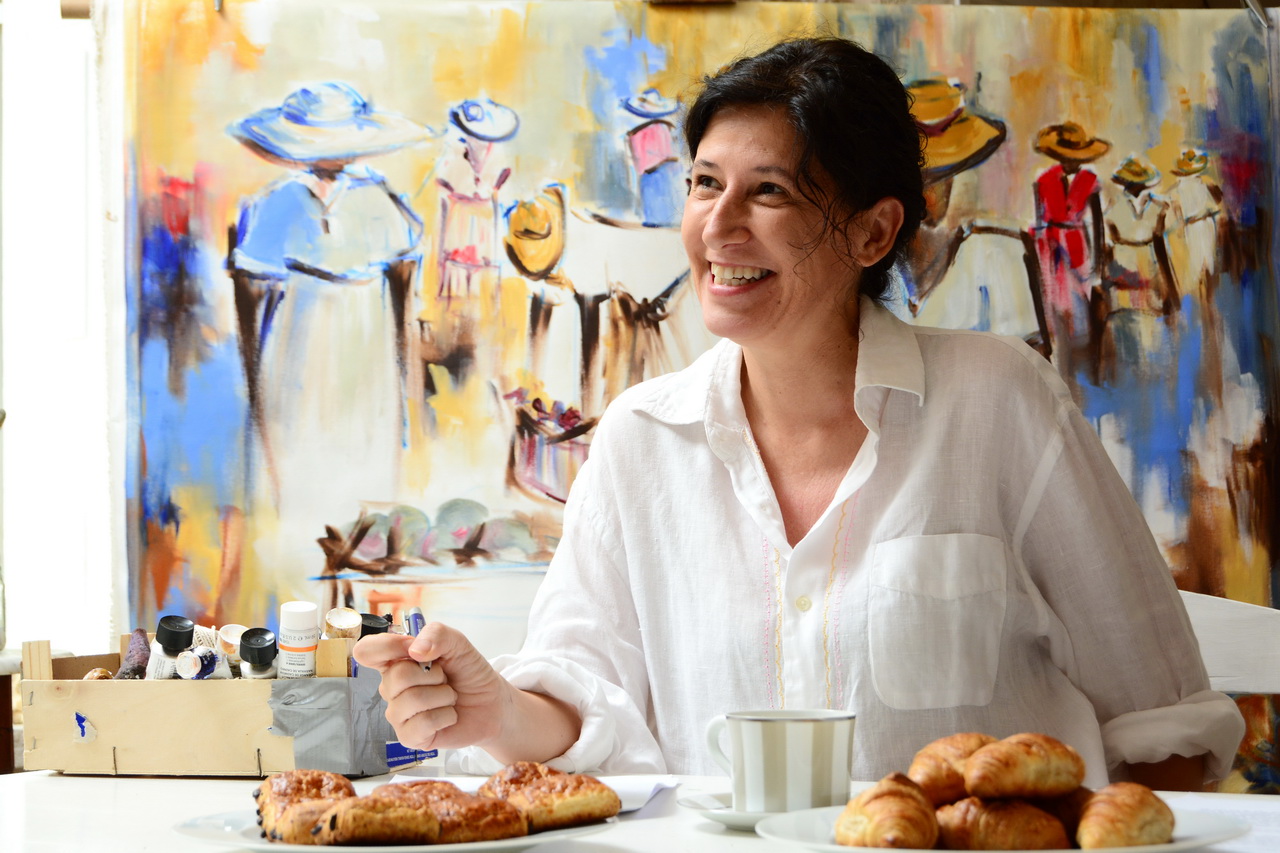 So Catherine, tell us, what brought you to Barbados?

It’s a long story. I’d even say a story that goes back a long way, as I came to Barbados a little over twenty years ago. At the time, I was completing a Master’s degree in Applied Foreign Languages (Business and Commerce section) at the Université de Bordeaux III and like many students, I had got a summer job to be somewhat financially independent.

I liked the wine sector because it afforded exposure to the world yet at the same time was firmly grounded in the terroir. I had a unique opportunity to work with Alexis Lichine, a Russian-born American wine expert and author, who owned several classified Grands Crus. He had been coming to Barbados and holidaying at Sandy Lane since the 60s. He always said, “You don’t follow trends, you set them!” And in a manner of speaking, he revolutionised the Bordeaux wine sector because at the time – and this might be hard to believe – there were no women in top positions in this industry.

So, one day, he called me into his office and I entered feeling slightly nervous. Out of the blue, he asked me if I’d like to spend three months in Barbados. I immediately said “Yes!” without thinking. I had a map of the world on my bedroom wall, so of course as soon as I got home I searched for Barbados… a small dot with no discernible shape on my map!  Rihanna wasn’t around at the time.

So, there in a nutshell, is how I ended up in Barbados… to develop a distribution network for premier French wines here and throughout the West Indies. As destiny would have it, one day, I caused LIAT (West Indian airline) that I took regularly to be late… and ended up marrying the Captain (laughing).

You know, when you’re in your twenties everything is easy (laughing)! The only thing was the rent… to be completely honest, the (high) rents charged!

Is there anything you know now that you wish you had known then and that would have made the process easier?

I had spent my final year at Oxford University as part of an academic exchange programme and so I was very confident when I departed for an English-speaking country. My daughter, always says that she speaks three languages, French, English and Bajan. Needless to say more… (the word Bajan refers to both Barbadians and the dialect spoken). 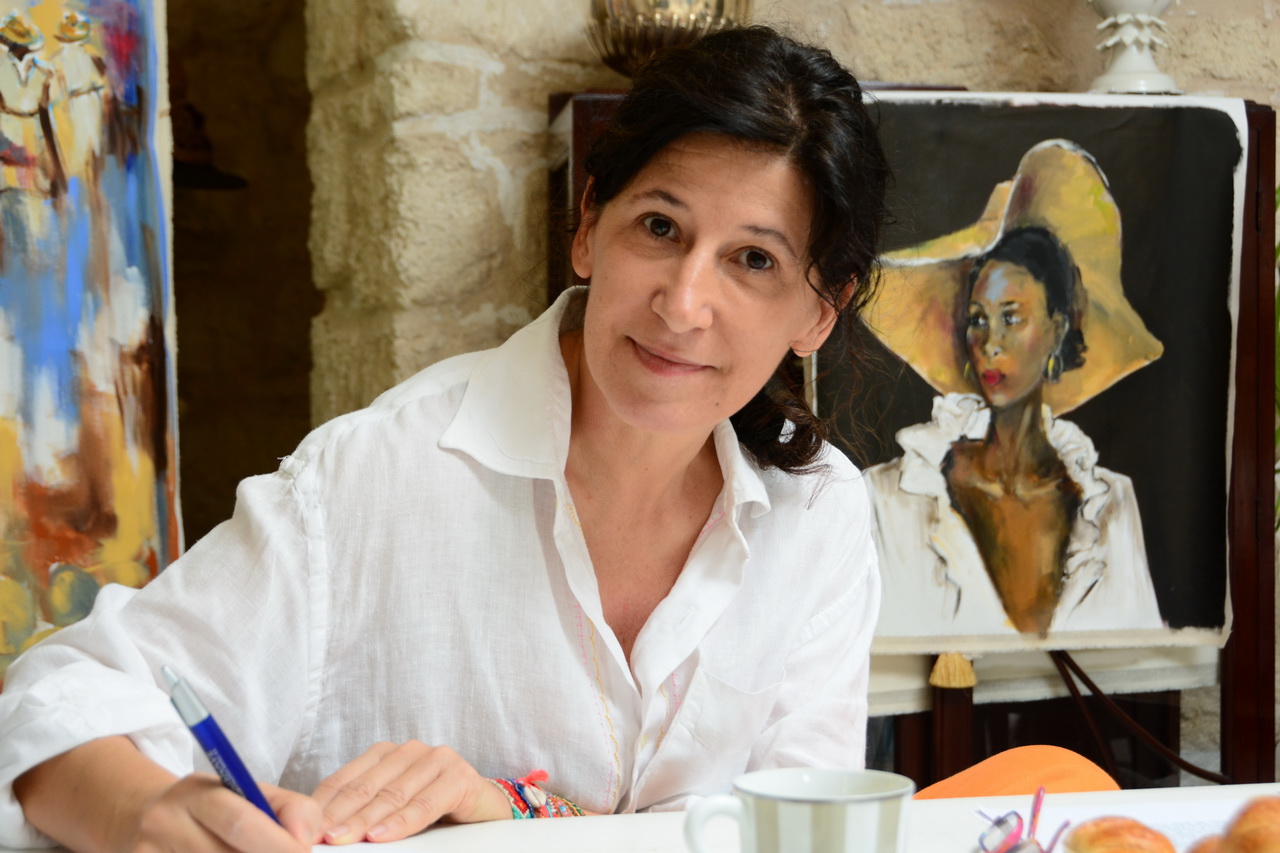 I can’t really speak of a culture shock. I was open-minded, open to discovery. ‘Cultural shock’ implies (a level of) comparison or even judgement in relation to my own culture, something I guard against. A few anecdotes all the same: I arrived for the first time in Barbados and the West Indies an evening in November, in other words, during the rainy season. That very evening, I had been invited by my Bajan contacts of that time for a traditional rum punch. It took place in the gallery, a typically Barbadian feature which is an architectural adaptation to tropical life dating from the Georgian era. Actually, it is a rather narrow veranda that wraps around the house, and allows the trade winds to be enjoyed whatever the season.

I became aware of a noise that in the heat and stillness of the tropical night – exacerbated by jetlag – seemed strident and I expressed aloud my surprise that no one was paying attention to the bizarre car alarm! Ha ha ha! It was actually a ‘whistling frog’, a tiny frog the size of a finger nail, whose ‘whistle’ is synonymous with the rainy season… 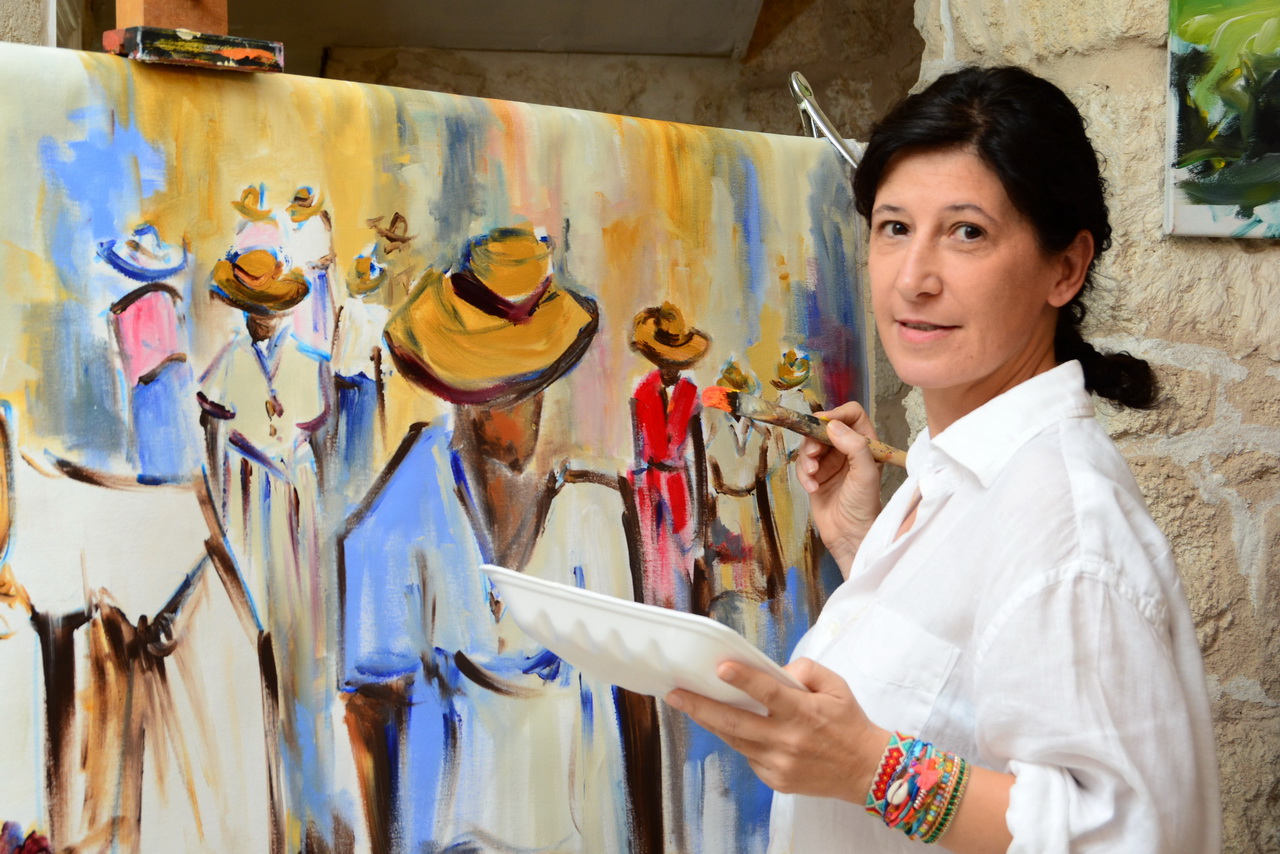 I know that you are an artist. So, in what way have Bajan culture and social mores influenced your artistic expression?

Barbados is without doubt the place of my birth as an artist. By artist, I mean the moment when I exposed my artistic work to the gaze of others and I realised that it meant something to the buyer. Irving Burgie, who composed Barbados’ National Anthem, has been collecting my work for several years now. The fact that my paintings hanging on the walls of his New York home reminded him of Barbados made me realise, and become confident in, the Barbadian identity of my work.

The luminosity is extraordinary here… the vividness of colours found in everyday life, the sea, which is never far away, the sky, but also the fruits on street vendors’ stalls, fabrics, women’s clothing, vegetation… the way the colour reflects on the incredible range of skin tones. I like to speak about the generosity of shapes and colours, yellow, orange, red, blue, green, the colours of the earth, colours that are omnipresent and only serve to influence artistic sensibility. Colours that symbolise energy, creativity, wellness.

Gauguin spent a year in Martinique after leaving (France) to work on the Panama Canal and of course, before going to Polynesia. Barbados, like the rest of the West Indies, was built over the centuries by the painful encounter of the continents and peoples of Europe, Africa, Asia and the Middle East, and I like to think that this has given it this sense of tolerance, durability and adaptability. Identity in diversity… I often think about (Patrick) Chamoiseau’s concept of Creole identity. I believe that this literary movement has value in terms of our society’s identity. I express this in my paintings through the representation of women, who in Barbados, are a constant source of inspiration and present an incredible diversity. 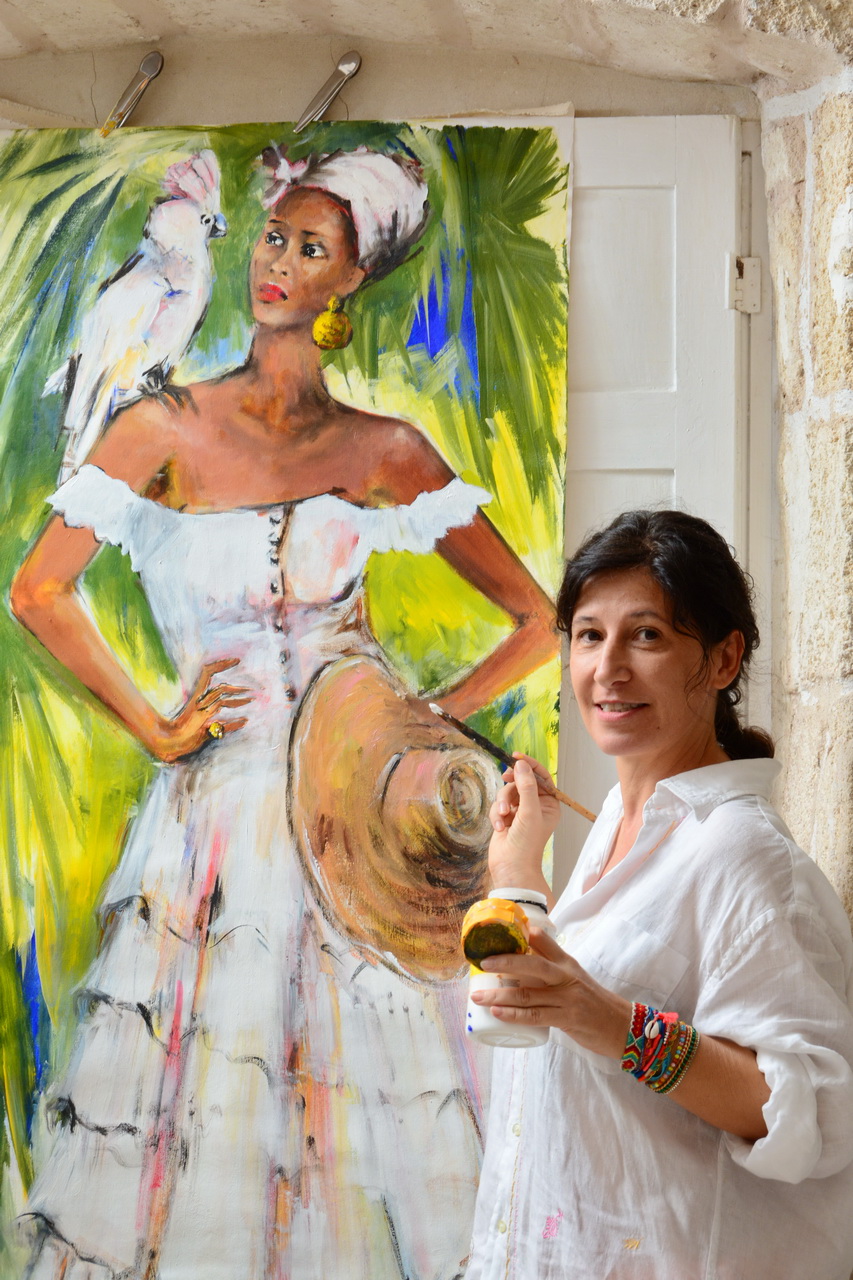 Do you think your development as an artist would have been different if you were in France, a country with a great artistic tradition and internationally recognised as such? Has being here been an advantage or just the opposite?

I think that developing my art in Barbados has allowed me greater freedom of expression and of style. By that I mean that I am not subjected to fads, because even in creativity, the phenomenon of trends exists.

What’s more, Barbados is a window to the world, for one thing, because geographically, we are at the crossroads of several continents – Europe, North America and South America – and also because we are an international tourism destination. This has given Bajan art real universal value!

Generally speaking, do you think that the Bajan public has an appreciation for art?

There is a great artistic dynamic in Barbados, in music, dance, song and painting. Art is alive and not just the domain of a privileged social, artistic or even intellectual elite. Art and music are two fully fledged disciplines in Barbados. They are mandatory and are taught at secondary school at least until third form (middle years). Children do coursework in painting, sculpture, do a little bit of art history and visit one or two art galleries as part of educational trips. And while waiting in the parking lot to pick up my children after school, it is not unusual to hear the sounds of a steel pan or a saxophone.

Yes, I think that the Barbadian public appreciates art precisely because of that introduction at school. Among the many art galleries that exist, there is even a mobile ‘Festival Gallery’, which visits various markets and cultural events each week. It’s very innovative and reaches a public that differs from that of traditional galleries. It even allows the youngest, future collectors, to make their first purchase! Festival Gallery was founded by a lady who took an exhibition featuring Barbadian artists to London every year for Independence celebrations. But, I’m sorry that we don’t have a national gallery!

Public and private sector indifference to preserving and restoring suburban architectural treasures dating from end-19th century and beginning 20th century. It hurts my heart every day when I traverse Bay Street, Country Road etc. I was really happy when Historic Bridgetown and its Garrison were classified as UNESCO World Heritage sites. 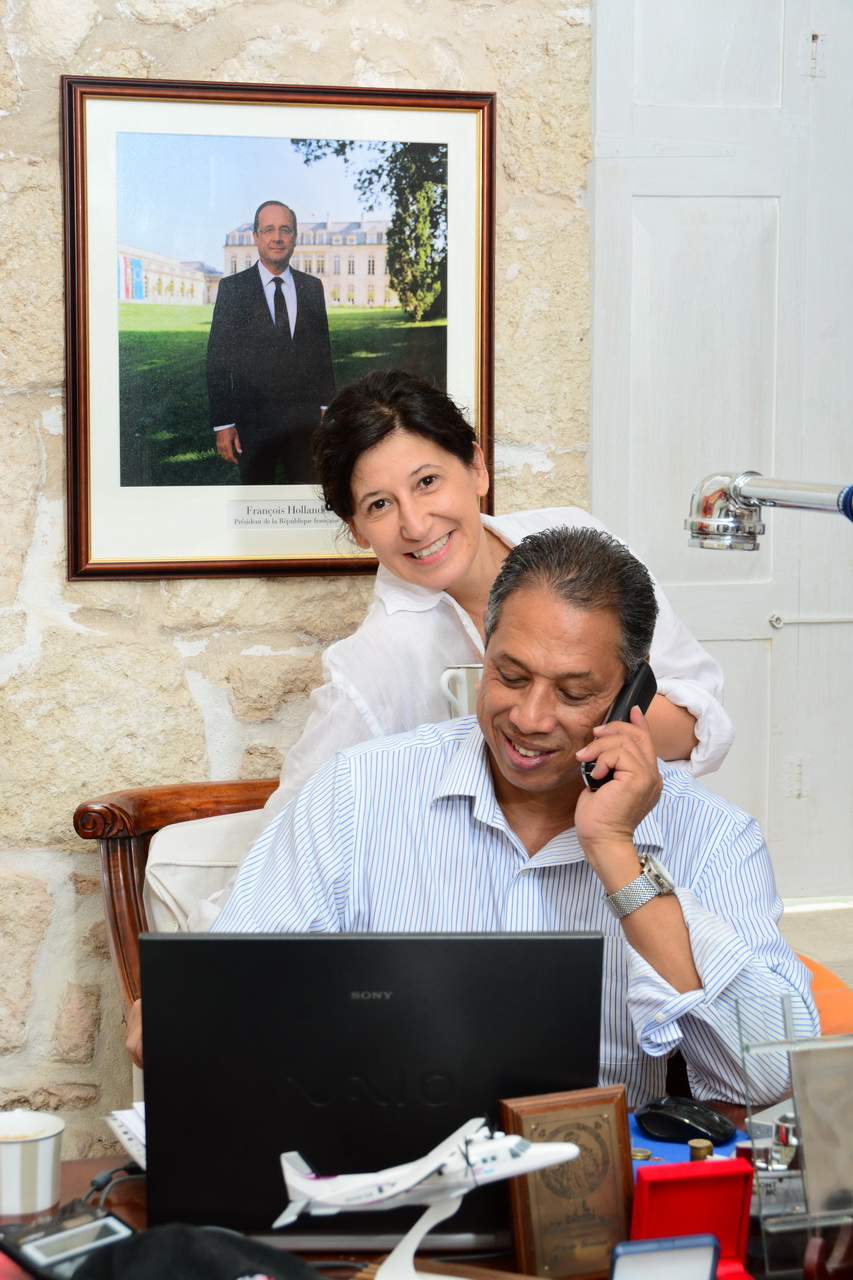 I like Bajans’ sense of tolerance… unity in ethnic and religious diversity.

I like Lancaster House and St Nicholas Abbey. I like the Museum – I go there regularly and spend hours in the little bookshop. I always find something new. I liked the exhibition on the Panama Canal. I also like the Crane for that feeling of wide open space and horizon.

Sea urchins (called sea eggs by Bajans). What a pity sea egg season is becoming increasingly rare! I love anything that comes from the sea. Chubs are another favourite of mine.

“You put on size.” I must admit that the first time I heard it I was slightly offended as I thought the person was saying that I had got fat (laughing). In fact, in Bajan it means that “You look good.” (The expression can imply that weight gain is flattering).

Carlisle Bay, for a long walk and a swim in the morning or late afternoon.

I paint or do yoga. I also like big game fishing and I like going out and listening to Jazz… we’ve got excellent musicians!

Any advice or tips for French people who might be thinking of moving here?

We all have different expectations when we choose to emigrate. But whatever reasons or expectations may have prompted your emigration, keep an open mind and let yourself be seduced by the pleasure of the sense of life in this part of the world.